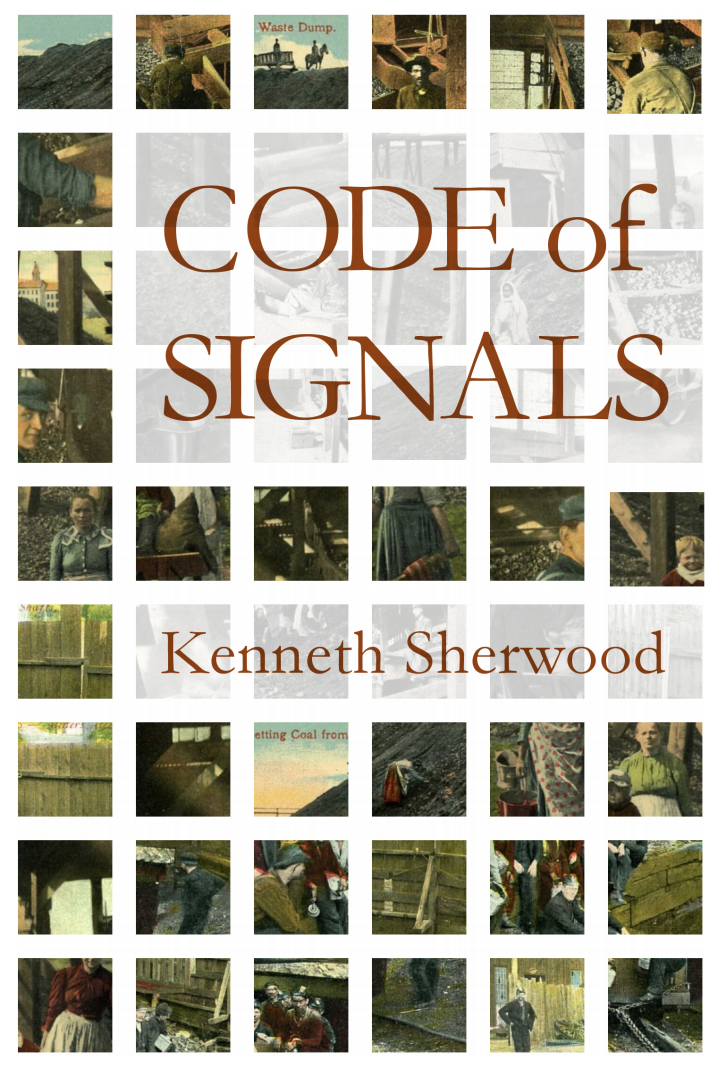 Sherwood's  book-length poem explores Western Pennsylvania, past and present, as a space and culture grounded in fossil fuels-- from ancient dead organisms, to historical remnants of 19th century mining, to current landscape and social transformations in the era of so-called Clean Coal, Green Energy, and Fracking for natural gas extraction. Conceived initially as a digital work, Code of Signals flirts with but largely eschews the controlling energy of the lyric voice in order to compose itself as the reader "mines it," using algorithmic rules to juxtapose original and found texts in dynamic, varying patterns.

Robert Farnsworth, author of Rumored Islands, Three or Four Hills and a Cloud, and Honest Water:

It's moving to see the best and most ambitious instincts of a poet persist and find flower, as [they] have here. The book is woven beautifully, its elements and methods (threnody and list and historical excavation) culminating in memorably admonitory lament. Bravo!

Deceptively anachronistic, Code of Signals is part safety manual for 19th-century mine shaft lift operators, part algorithmic program, and part meditation on coal and the lives of its miners.  Sherwood assembles these elements into a delicate allegorical architecture that invited me into deep reflection on the politics of our own particularly troubled moment in American history. As different signals are sounded, like bells communicated to mine engineers, coal is framed scientifically, aesthetically and culturally, but most poignantly and most prominently, as an instrument of and marker within the fraught class dynamics of the country then and now.  Grainy, colorized photos are paired like bookends with sensational Victorian headlines of mining tragedies around scenes in the life of a poor Pennsylvania miner’s family yearning for the warmth of his company and a fire in their own grate.

Sherwood’s vignettes are subtle, loose and mesmerizing.  And, while there is not the slightest trace of didacticism or moralizing in Code of Signals, my mind repeated turned to the tens of thousands of men throughout the centuries that have been told to be grateful for this most dangerous, uncomfortable and humiliating work.  In the history that Sherwood paints, I can understand the sense—to some degree—in this mercantile logic.  But as the last signal bells ring down to silent memory, there can be no reason to hold so tightly on to that ideology, particularly when sustaining a commitment to it endangers now not just the lives of miners.

This finely-crafted chapbook draws inspiration from Williams, Reznikoff and Zukofsky but should not be consigned to abstract debates about old modernisms—it has as much to contribute to arguments about the contemporary American lyric as it does to arguments about our attachment to fossil fuels.

Available from the publisher Moria or from the author (kwsherwood@gmail.com)

Coal Code Node This is a display program written in P5.js by Kenneth Sherwood for the "Coal, Code, Node" exhibit with Bob Sweeny, October 2018, Kipp Annex. For the installation, a video loop was captured and this projection was combined with a film loop created by Sweeny and projected through a network of ropes strung across the space.